I was so eagerly looking forward to the STRONGCAMP in Los Angeles. I love that place.

Sadly, it feels like in a blink, it was over. It was such an amazing time that it simply got away from me. The moment I landed in LA the sun was on me.  I flew in from Toronto where we were experiencing (and still are at the time of writing this) experiencing a cold snap. Because I landed early in the morning I had time in the afternoon to take in some sites and visit some celebrity homes. Yes, I felt tacky getting on one of those open roofed vans and checking out people’s homes but I have to tell you, it was so worth it.

I had a couple of days prior to the CAMP of shooting some of those which were in town for the STRONG CAMP.  We had some good people in town and I could just feel it was going to be an amazing weekend.

It began with the Friday night meet and greet. If you plan on attending a STRONG CAMP in the future, I recommend attending the meet and greet.  It was great to see so many excited faces. (there were 26 of us). There was an energy and excitement around all of us. Everyone made friends fast. It’s like an awareness of a closeness that simply needed to happen. I wanted to say Namaste to people rather than hello. (Wikipedia defines Namaste:  ”I bow to the divine in you” showing (in Buddhism) your acknowledgement of the spirit that inhabits the body of the person you are greeting.) Unlike the Phoenix STRONG CAMP, we began our Saturday by meeting in the lobby of THE STANDARD. STRONG CAMP Director Jessie Hilgenberg discussed where we’d meet for our hike of Runyon Canyon and arranged rides for everyone. This is where I’d meet Jessica “San Diego” Burgio. I called her “San Diego” the entire weekend because we met as a group and for the life of me, I couldn’t remember her name. By the time I did, ‘San Diego’ just stuck. Anyhoooo….

We get to Runyon Canyon and as luck would have it, there are multiple entrances. As everyone started from different places, the STRONG CAMP attendees were scattered throughout the Canyon. lol. We all did our own thing and would often run into each other on various paths. It was fun doing it this way. I should mention at this point that I had a serious chest infection and was coughing like crazy. The dry canyon air seemed to do it some good, but the shortness of breath also served to humiliate my climbing ability. (I’m glad Jess Mahnken-Moore wasn’t in my group, as a professional climber she would have had a field day on me).

After taking some summit group shots (of most of us) we all decided to head down and make our way to the gym (Mansion Fitness) for some lunch, and afternoon session. I regretfully had to step out for most of the sessions in the afternoon as my cough was distracting. Jessie had Tiffany Bacchus come in from Phoenix to talk along with her cousin Erin Macdonald about nutrition. They brought their current book NO EXCUSES! 50 Healthy Ways to Rock Breakfast for everyone and judging by the amount of questions, everyone seemed captivated.

I also invited my good friend Lori Harder to come out to the camp. She loved the invite and was even gracious enough to speak in one of the afternoon sessions. I caught most of it before my cough kicked in (and I had to step out again)  but I could tell she had everyone totally engaged. Dare I say it… She had our tough-as-nails Editor in Chief, Kirstyn Brown all teary eyed.

Quest Nutrition dropped by with a bunch of boxes of products for everyone.

We rounded up the day with Jess Mahnken-Moore leading the class in some relaxing Yoga. That evening we all went out to diner at Real Something Foods. It was a fancy menu with no meat but bacon substitutes. I found them to be quite,… Bacony. But I digress. Everyone was excited about the days activities and much of the sessions talks carried forward onto dinner.

The next morning we all met back at Mansion Fitness for what was going to be an amazing day. Jessie started the day with a great circuit workout – Not easy to do when you have 26 people! It was such a nice stylized boutique type gym that the pics from the circuit training turned out amazingly well. I wish I could share them all here but they are being reserved for STRONG Fitness Magazine and the STRONG Training Guide. Everyone is going to appear in both issues. As soon as the workout was finished I asked everyone to step outside, to the back of the gym. I wanted to get the group shot of everyone right after they worked out. I wanted everyone glowing from the workout. I needed the picture to be as real as possible. These are STRONG women – No BS. After the group shoot, we went back inside for a quick morning session before breaking for lunch. We pretty much invaded Whole Foods across the street.

The afternoon session with Jessie Hilgenberg was everything our camp has come to be known for, which is more than just working out, it’s about sharing, listening and caring. Like the Phoenix camp before, emotions ran high and many tears were shared. Even though I don’t participate in the process, as an observer documenting the event I would be lying if I said I was immune to the potency of feelings going around. I learned from the last camp to carry tissues with me. They came in handy again here. The camp wrapped with Jessie leading everyone in some relaxing yoga, with beautiful music and inspirational readings, (So much so, even Jessie would break down while reading them).

I am so proud of everything STRONG CAMP stands for. Jessie has turned the utopian concept of physical strength and emotional well-being and made it something obtainable.

If you’re interested in attending our next STRONG CAMP, check out the flyer below and visit STRONGfitnessmag.com to register. 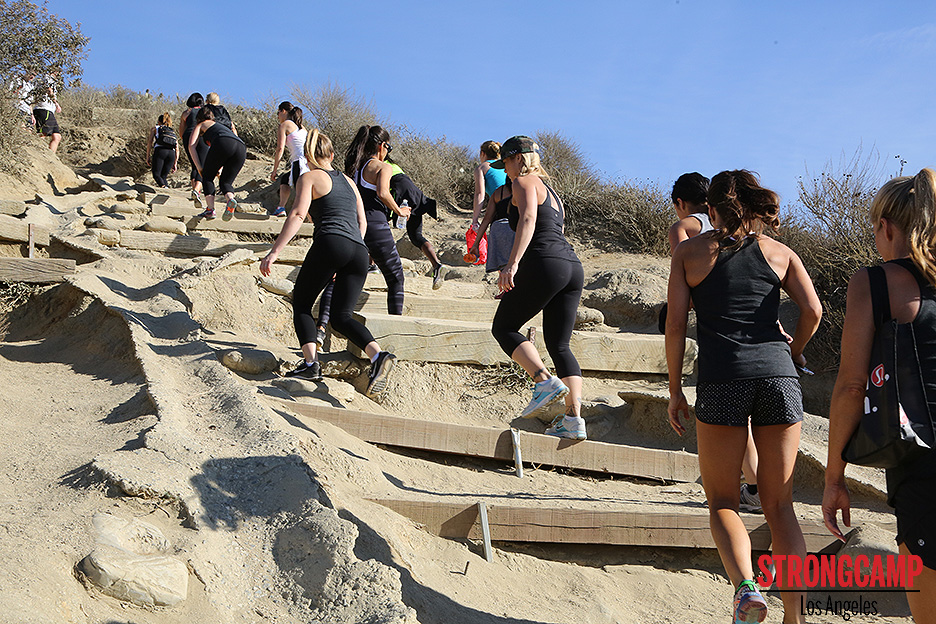 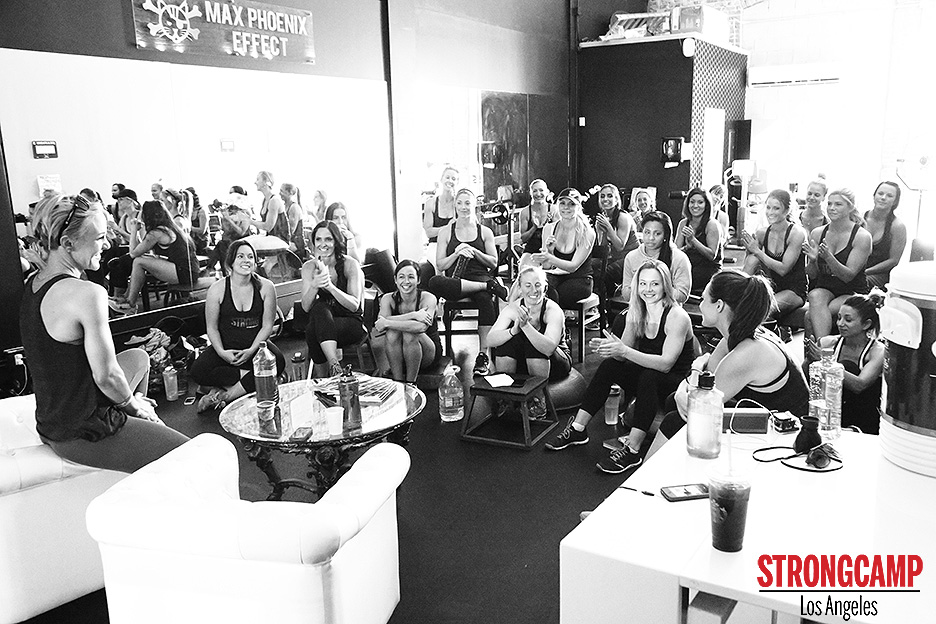 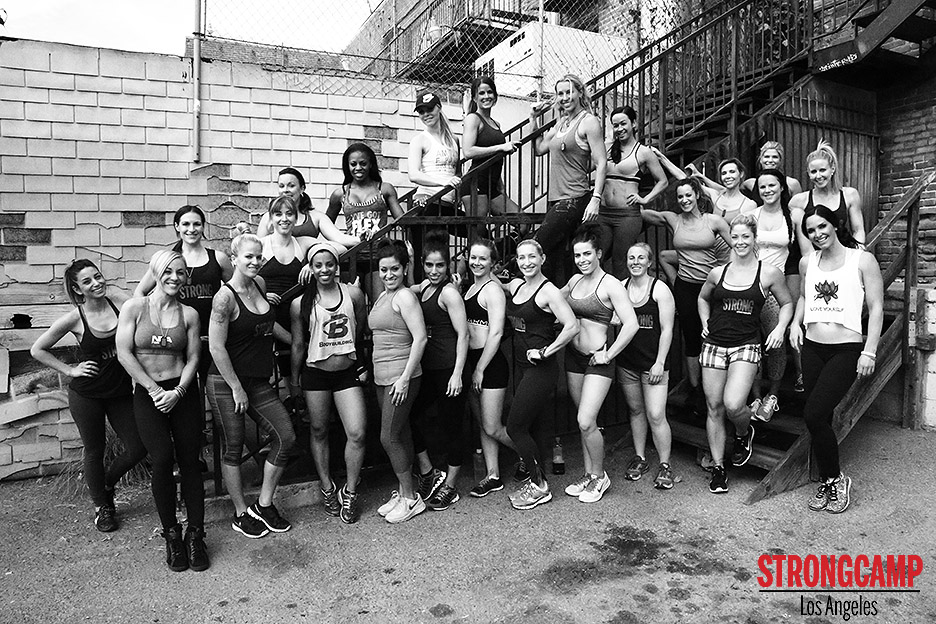